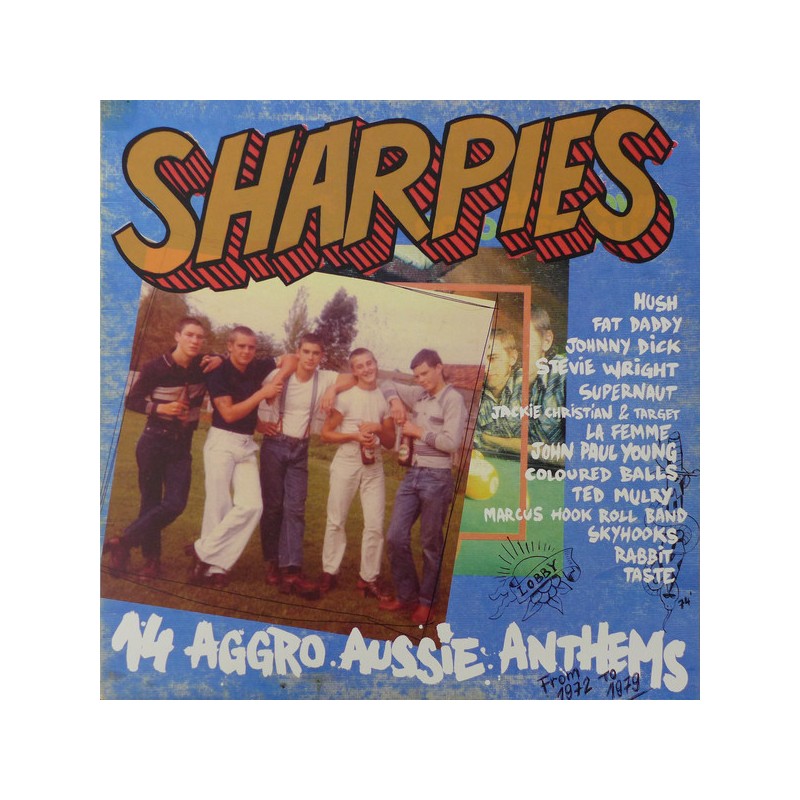 Repress on black vinyl. '14 AGGRO AUSSIE ANTHEMS FROM 1972-1979' - Sharpies were the terror teen cast of a Richard Allen novel that never was. Although largely synonymous with the early-to-mid 1970s, reports of their violent clashes with rival gangs of Mods are documented as early as 1966. Bored, working-class, suburban kids, their teenage rampage began in Melbourne, Australia, but soon there were Sharpie gangs forming in Sydney, Perth and beyond. For a while they were the untouchables, ruling dances, discos and public transport with their fists. Sharpies were fiercely territorial and divided into different chapters according to location. They would often wage aggressive wars within their tightly delineated sub-gangs, although Mods always remained their arch-enemy. Sharpie boys and girls wore similar uniforms: a slim-fitting, ribbed and collared cardigan called a Conny, T-shirts, tight jeans (Lee or Levis) and big platform shoes. Hair was worn short or shaved with long wisps at the back, influenced by the British ska, mod and skinhead subcultures. Sharpie girls had their hair slightly longer and often with coloured streaks - Bowie-red was their colour of choice. Boys often bleached their hair. Tattoos were popular, although many were homemade and poorly executed. Their diet was anthemic glam-rock, kung-fu movies and A Clockwork Orange. As the 1970s drew to a close, and new styles like punk and disco began to emerge, Sharpies started to fade. By 1979 they were all-but gone. Today they are recognised as an important part of Australian youth culture and social history. This compilation features rare tracks and 'cult' anthems that were the soundtrack to the rise of this Australian answer to the skinhead subculture: with the likes of the Hush, Fat Daddy, Supernaut, Skyhooks, John Paul Young... it can't be missing in any 'Killed By Death' type collection!
SIDE 1:
1. Marcus Hook Roll Band - Natural Man (1972)
2. Coloured Balls - Heavy Metal Kid (1974)
3. Stevie Wright - Hard Road (1974)
4. Fat Daddy - Roll Daddy Roll (1976)
5. Rabbit - I Like To Hear My Music (1976)
6. Jackie Christian & Target - The Last Time I Go To Baltimore (1974)
7. Skyhooks - Living In The 70s (1974)
SIDE 2:
1. Johnny Dick - The Warrior (1975)
2. Ted Mulry - You've Got It (1977)
3. John Paul Young - Yesterday's Hero (1975)
4. Hush - Mindrocker (1974)
5. La Femme - Chelsea Kids (1979)
6. Supernaut - The Kids Are Out Tonight (1977)
7. Taste - Boys Will Be Boys (1976)